Interview with Guillermo Mena Marugán, researcher of the IEM-CSIC, in the documentary video "The Big Bounce, sigs in the CMB?"

An international team with participation of J. M. Fernández and T. Ezquerra from IEM has investigated by X-ray diffraction with synchrotron light the crystallization of Ar and Kr blends in supercooled liquid jets. This study offers new perspectives to better understand the complex crystallization behavior of blends and alloys.

A collaboration of IEM researchers with the University of Regensburg demonstrates an unprecedented control of the photoluminescence of very thin semiconductor nanowires. 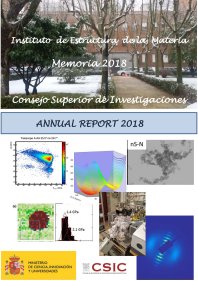 Rafael Molina, scientist at the IEM, comments on the simulations of a new state of matter made by scientists at Edimburg University in El PAÍS.

The IEM has the following departments:

Here you will find the list of members of the Institute, as well as the office number, phone extension, and e-mail address.

This section contains the different Service Units of the Institute, such as Administration, Maintenance, Warehouse, Library, etc.