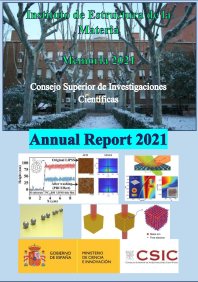 Christophe Rappold, a researcher at the Instituto de Estructura de la Materia, CSIC, has collaborated in the Nature Review Physics with the paper "New directions in hypernuclear physics".

The IEM has the following departments:

Here you will find the list of members of the Institute, as well as the office number, phone extension, and e-mail address.

This section contains the different Service Units of the Institute, such as Administration, Maintenance, Warehouse, Library, etc.